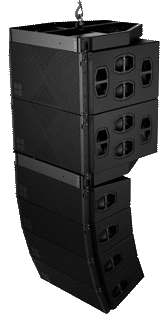 The Line-Array is the modern deployment of a design first developed by Harry Olsen at RCA in the 1950s. The ubiquitous column loudspeaker cabinets of the late 1960s and early 1970s (WEM was one prominent UK brand) were an early elementary form of line-array. While these were abandoned by the music industry in the 1970s in favour of today's conventional point-source cabinets, they remained in use in churches and similar buildings for the whole of the intervening period, and are still commonly installed in houses of worship.

The larger-scale line-arrays that are used today - the standard (almost the only) design employed in major festivals at the time of writing - did not appear until L'Acoustics pioneered their V-DOSC systems in the 1990s, but by 2010 even some low-budget loudspeaker manufacturers had begun to feature ranges described (if not always actually functioning) as ‘line-array’.

Physically, it is a group of loudspeakers designed to be hung or stacked so that the closely-spaced drivers are arrayed in a line. Although horizontal line-arrays have been used in some (usually public speaking) applications, the line-array in modern PA systems is a vertical array of speakers, where each array is usually flown (hung) from a gantry or truss tower, although most designs also allow for cabinets to be stacked. There will usually be two arrays for standard stereo operation, although additional arrays or separate cabinets or clusters may be needed to fill the front-central and/or side sections of a wide audience area.

Typically, the individual drivers and cabinets in a vertical line-array exhibit a very narrow vertical pattern, combined with a relatively wide (90° or more) horizontal pattern.

Principally it offers both perceived and measurable improvements in audio performance in large arenas compared with other types of multiple-cabinet loudspeaker system. These include:

From an audience or front-of-house sound-engineer's perspective, line-array systems give a greater sense of proximity (‘presence’), as though the sound source was much closer than it actually is. Conversely, a line-array loudspeaker system is generally less prominent as a focus for attention (the location of the array is a less noticeable element in the overall experience than it tends to be with conventional point-source systems). At the same time, performers and monitor engineers generally find that line-array systems are a less intrusive part of the on-stage sound than comparable point-source systems.

Line-array design and the underlying acoustic theory is complex, and some of the theoretical advantages and proposed mechanisms of operation do not enjoy industry-wide consensus.

Probably the most widely disseminated explanation of how line-arrays work is the ‘cylindrical wave’ model[1], which - in spite of its popularity - has more to do with marketing than with physics.

In broad terms, line-array systems achieve improved acoustic performance through interference between individual drivers in the array. Some of the underlying principles of this are discussed in further detail in the section on Phase.

The principal difference between the line-array and a conventional stack of individual cabinets is that the drivers and/or horns in a line-array are arranged to allow multiple outputs to interfere constructively in on-axis listening positions and destructively in off-axis positions, improving:

There are, however, practical difficulties in implementing some of the design criteria.

First, coupling requires close proximity between adjacent drivers. To couple efficiently, adjacent driver centres need to be closer than half a wavelength of the highest frequency in their range. Acoustic coupling is therefore relatively easy to achieve at lower frequencies, where audio wavelengths greatly exceed driver dimensions, and where relatively high off-axis angles have a limited effect on phase. However, while the use of smaller drivers can extend coupling into the midrange, the half-wavelength at 5 kHz is less than 3.5 cm, which is less than half the magnet diameter of a typical 1" driver. Clearly, then, a line-array system cannot easily achieve coupling at the highest audible frequencies.

Second, directional control cannot be maintained over wavelengths greater than (or even nearing) the length of the array, so at lower frequencies - the wavelength at 40Hz is more than 8.5 metres - there is another barrier to the line-array's effective pattern control. Flown subs also lose 6dB through the removal of half-space loading, and the additional weight of low-frequency cabinets potentially compromises load capacity at the array's suspension point(s).

The difficulties in the higher frequencies are compounded by the need to use horn-loaded drivers to maintain efficiency and pattern control. The exit size of a typical horn further impinges on the minimum possible driver proximity. At the same time, sound spreads radially within the horn, so there is some outward curvature of the wavefront at the horn exit. As a result, there is an area of high interference between the exits of adjacent horns:

An operational limit to using closely arrayed horns in this way is where the outward curvature[2] of the wavefront at the horn exit (the distance denoted by the letter "a" in the diagram, below) exceeds one quarter of a wavelength of the highest frequency reproduced. At 10 kHz this is only 8.5 mm.

At the lower-end of the audio frequency spectrum most line-array manufacturers produce bass cabinets that can be incorporated in a flown array. These are usually positioned at the top of the array, as this reduces the load on cabinet suspension links. However, use of these in isolation does not generally provide satisfactory bass levels, and most line-arrays will use ground-located bass units (either as well as or instead of flown bass cabinets). For optimum control these will be arrayed in a horizontal line (the bass array arrangement shown in the section on Speaker Position is an example).

As a result, covering an area where there is a large vertical angle between front and back audience positions may call for an array of impractical length (or require the array to be flown in an unsuitable location).

A common solution is to increase the downward angle of the lower cabinets, forming a "J" array. Some manufacturers produce dedicated cabinets with a wider vertical pattern to cover the lower part of the array, although this practice is not universal. An alternative method is to use an array with a uniform curve (several manufacturers incorporate this in their design), which avoids the more complicated interference effects inherent in the J-array.

How do you use it?

You will certainly need to read the manufacturer's user guide, as mounting and controller configuration instructions will be system-specific.

Most line-array systems are also provided with acoustic modelling software, and you are unlikely to achieve optimum performance without using it. It is often possible to load venue details from the software or loudspeaker producer's database, but you will need to enter information manually where details are not available.

Based on venue and equipment details, the software will determine the number and type of cabinets required and preferred mounting or stacking locations, as well as controller/amplifier settings (including, where appropriate, gain settings for individual cabinets or cabinet groups).

For flown systems you will also need suitable mounting hardware (which in turn will probably mean you need to employ a rigger). Flown systems are easier to install than stacked systems, as the line-array can be assembled one cabinet at a time at ground-level before being winched into position.

Once the line-array is up and running, you can use it like any other loudspeaker system.

Do you need one?

For small provincial arts centres and village halls, definitely not (and don't even think about it for pubs). For large auditoriums and outdoor events with audiences of more than a few hundred, the line-array is an improvement on other types of multi-loudspeaker system, but good point-source systems are considerably cheaper, and still provide quite respectable performance for audiences of less than a couple of thousand.

Line-arrays are designed to be flown, and while ground-stacking options are available from most manufacturers, the full benefits of a line-array system cannot be realised unless it is flown. If you are not also able or prepared to invest in suitable equipment for flying a line array system (truss, motorised hoists, and all that goes with a flown system), then investing in a line-array probably isn't a Good Idea.

If you require a system primarily for auditoriums with a depth of more than 40 or 50 metres (or outdoor events of a similar or greater scale), however, you should certainly give it some serious thought. If your likely platform is moderately large but not vast (minor festivals, not Glastonbury, and large concert halls, not stadiums), you might want to look at some of the "mini" line-arrays that several of the major manufacturers offer.

What sort do you need?

As well as good audio performance, look for ease of assembly, software you can understand, and extensive manufacturer support. It needs to be at least ‘water resistant’ if you are planning to use it outdoors. Don't expect to have much spare change after you have sold your house to buy it.